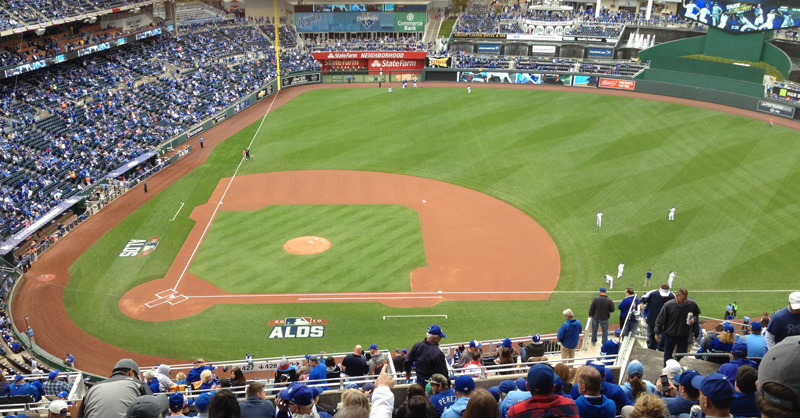 Last Thursday, March 28th, was the earliest opening day on record for the Kansas City Royals baseball club. It was also one of the coldest and wettest openers that I can remember as a KC native and Royals fan. As a matter of fact, the rain kept the Royals and their opponents, the Chicago White Sox, hold up in their respective clubhouses for about 2 hours beyond the 3:15 p.m. game time. And, of course, that lengthy rain delay left a lot of fans wondering if they’d get a game in at all.

By the time the game got under way, quite a few fans were in their seats but a large number of fans had already headed home or remained in the parking lot to tailgate in the dry, warm comfort of their cars.

The Royals not only went on to win the game 5-3 against the White Sox, but every fan was also a winner as the Royals organization is providing a voucher for a free ticket to anyone who bought a ticket to the opening day game, whether they attended or not.

Why? Because the Royals felt the need to reward their fans for being inconvenienced.

This isn’t just the delivery of a “WOW!” customer experience, the team is doing what is in the best interest of their customers even though the situation of a long rain delay was not their fault. This fan first philosophy, though, also brought the Royals a ton of free publicity and city-wide praise, not to mention a reserve of goodwill.

Here’s the best part. The fans don’t even have to jump though a bunch of hoops to get their voucher nor are there a multitude of restrictions on it’s use.

The Royals said they will send an email in several days to the email address used to purchase tickets for the game with details on how to get the free ticket. The ticket can be used for any future Royals game between April and the end of the 2019 regular season. And, vouchers will be redeemable online with no fees.

“This is a thank you to our fans who waited out the weather to support us on Opening Day,” said Kevin Uhlich, Royals Senior Vice President of Business Operations. “We also know many fans who bought tickets couldn’t make it out to The K because of the delay, and we want to reward their loyalty, too.”

It would have been oh so easy for the Royals to say they got the game played and to tell their fans, sorry for the delay or sorry you missed it. There’s no doubt they would have been in the right to do that since the rain stopped long enough for them to play. But, that would have done nothing to build goodwill with the fan base for the rest of the 162 game season.

Considering opening day draws one of the largest crowds to the stadium, the last thing the team needs is to stand by a policy that produces negative word of mouth and/or a fear of investing in another game—and if you’ve ever been to a baseball game, it is an investment—especially for families.

Most organizations have a series of rules, regulations and policies that dictate their operation in order to run efficiently. The idea is to provide the best possible service within the limits of these guidelines. Too often, though, a company wants a one-size-fits-all policy.

But, what happens when a customer makes a reasonable request in a situation that doesn’t fit under a company policy? What is your no-fault rain policy?

Customers know that a company needs rules to prevent any number of abuses, but they also think every company needs to treat their customers as humans with real human needs. Can your business put people over policy when the time calls for it? Yes it can,

Standing firm on a policy that can lose you customers and produce negative word-of-mouth is dangerous and unnecessary.

Instead of being bound to a policy that treats every situation and customer exactly the same, be open to valid exceptions. Demonstrate reason and make a second effort to “WOW!” your customers.

Learn to speak fluent “WOW!”—the language of high-paying customers who will also become your most loyal, raving fans. Contact Ron to speak at your upcoming event or to provide a special, Customer Experience training session for you and your team – email ron@ronruth.com or call (816) 224-4487.

“Ron’s presentations are full of the kind of energy and enthusiasm that keeps audience engaged and wanting more. And, his inspiring, imaginative and creative ideas for helping business owners and their teams ‘WOW!” their customers and remain top of mind, makes him a highlight of every conference.” – Rick Brewer, WeddingBusinessMarketing.com

“Ron Ruth has been an industry advocate and trainer for small business owners with our training team for nearly 10 years. Ron has shown a great grasp of understanding what it takes to move a business to the next level with engaging sales approaches, creativity, and customized outcomes based on the clients. ” – John Young, Publisher, Disc Jockey News

One thought on “Kansas City Royals “WOW!” Their Fans”